Feel The Buzz: An Interview With Mosquitoes

Jennifer Lucy Allan takes apart Clive Phillips, Peter Blundell, and Dominic Goodman’s trio to unpick how they’ve built their distinctive no wave by negation, and gathered a small and dedicated fanbase on the way 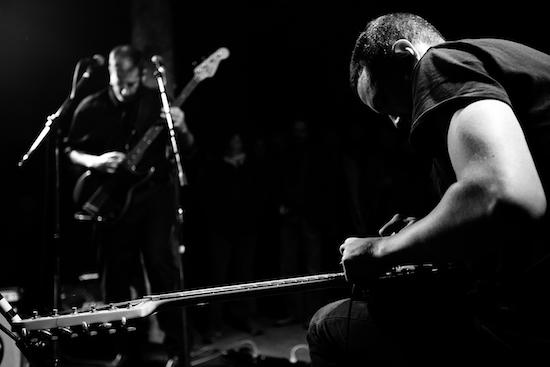 Mosquitoes are a band best described through what they are not. They are no wave by negation; post punk but only at a push, and are more This Heat or DNA than Orange Juice. They are not rock or punk, although they have drums, guitar, bass and vocals; they are certainly not jazz, although like free improvisation there is an ambition to escape genre. They are like Mars in some respects, but make Live At Artist’s Space sound like a Gang Of Four best of. They have also been compared to US Maple, Nate Young’s Regression series, and German industrial group P16.D4.

These comparisons are however, stretched to their threadbare limits when subjected to Mosquitoes’ suffocating absence of footholds, their abandonment of the scaffolding of lyrics, riffs and regular rhythms but retention of whirr and rattle, fatigued industrial textures, wordless vocals, echoes, clangs and thuds.

They have captured some of the no wave palette in hollow production treatments; the ricocheting reverb of analogue dub; they are experimental in the sense in which everything without verse and chorus is experimental in some way or another, but are also not experimental, because after years of playing together, Mosquitoes know exactly what they are doing. Now, five years after their first 7” was released, they have a small and committed following in underground circles, and while they have turned heads and sold out short runs of their EPs to experimentally-preoccupied fans, they have also resisted becoming any sort of scene band – they’d have to play live a bit more for that.

I first met Mosquitoes, the trio of Clive Phillips (drums), Peter Blundell (voice and bass guitar), and Dominic Goodman (guitar and electronics) in person last summer, in the shadow of Zaha Hadid’s Olympic pool during the brief hot freedoms of summer 2020. Prior to that interview, there had been little information about them online – I knew little more than their recorded output and their band name, which always appears on sleeves in Blundell’s bold freehand type. This was a glorious absence of context, the sort that doesn’t come around much nowadays for a band with a handful of records out, even if technically, haven’t ever released a full-length album.

Today, I am speaking to them all separately (and remotely), to parse their sound and triangulate the sensibilities that form their distinctive push and pulling apart of the not-quite-post-punk palette. In person last year, the conversation had pinged in half-finished sentences between each member, a stream of consciousness from three individuals, but talking to them apart reveals the contribution and character of each – Blundell is literary, the organiser, and prone to explosive bursts of laughter; Phillips is an obsessive editor who wants to strip everything back to almost nothing, but with whom it’s hard to get a word in edgeways; Goodman is the mediator when it comes to artwork, a sort of thoughtful magpie for texture, space, and restraint.

The absence of information is intentional, but is not intended to be cryptic. Instead, it is an extension of their refusal to put anything out they don’t feel absolutely necessary, because originally, nothing was ever supposed to be out there at all. “In the early days ‘mysterious’ was attached to us quite a lot,” says Goodman, “but it was more about being very controlled about how we wanted to communicate and for all those communications to be worthwhile.”

Mosquitoes never intended to release music or play live – they were just friends with shared interests at first. Phillips and Blundell knew each other from art school in the 1990s, and then Phillips introduced Goodman and Blundell at a Fushitsusha gig in 2012. They talked so much about art and film and music, at some point someone suggested they make some, so they started playing as a trio. Goodman describes those early sessions as a “freedom bubble” of music-making, but one where they spent three years refining a vocabulary of sound. Only Blundell had ever played in bands before, with musician (and Café Oto sound engineer) James Dunn, in a duo called Temperatures.