In 1959, noted American author and composer Paul Bowles made several trips around Morocco recording as many strains of Moroccan traditional music as he could capture. Bowles curated some of these recordings for release on a 1972 2-LP set "Music of Morocco" issued by the Library of Congress. 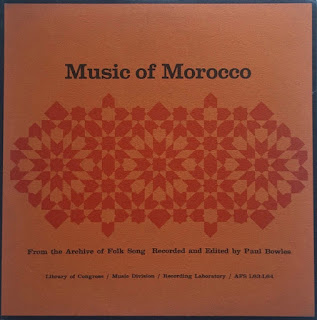 Bowles recounts some of the experiences of the 1959 recording project in the essay "The Rif, to Music" in his essay collection "Their Heads Are Green and Their Hands Are Blue". For a deep dive into Bowles' musical upbringing and aesthetics and how these inform his recording project, it's well worth seeking out Philip Schuyler's essay "Music of Morocco: The Paul Bowles Collection", included in the 4-CD reissue and expansion of the Library of Congress album, released in 2016 by Dust to Digital. This release is one of the most beautiful artifacts in my own stash - from the ornate box to the leatherette-bound booklet down to the track selection, sequencing, and notes, everything was done with great care, thought, and taste. 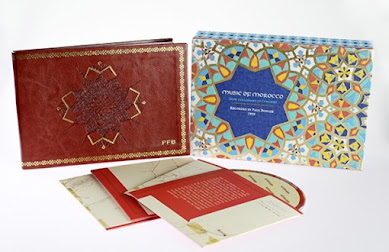 If you can't find the box set, the album is available to purchase digitally at Bandcamp, including a pdf of the booklet. The album is also available to stream online through various platforms, though of course without the reading materials:

I had meant to post something about this back in 2016, but did not manage to do so. While scrolling through Twitter last week, I stumbled across a YouTube clip of a Gnawa recording I'd not heard before, originating from the Bowles' collection, but not issued as part of the LP or CD sets. The video was uploaded by Archnet, a digital resource sponsored by MIT and the Agha Khan Trust for Culture.

It turns out that Archnet has made the entire collection available online in YouTube form! 60 reels of tape! As Michael Toler of Archnet explains on his blog, these clips are raw transfers of the original tapes, so do not expect them to sound like the versions on Dust to Digital's release, which were nicely mastered to improve sound quality.

Still, what an amazing gift to be able to hear these tapes! As an additional gift, Archnet has uploaded a scan of Bowles' own typed notes on the recordings, which accompanied their submission to the Library of Congress: http://archnet.org/publications/10093. Excerpts from these notes appear in the Dust to Digital booklet, but you can now see the whole set.